I’ve just added a transcription of a great chorus of single note playing by the unassailable Wes Montgomery.  It’s on the standard Here’s That Rainy Day, but this isn’t the version from his Bumpin’ album with strings, it’s a live quartet version from 1965.  Check it out on the Wes transcriptions page of the site.

Three more transcriptions added to the site:  Grant Green’s 32 bar solo on The Best Things In Life Are Free, Peter Green’s classic intro to Need Your Love So Bad, and a tiny eight bar solo on Don’t Let It Go To Your Head by the lesser known John Collins.

The other day I caught up with brilliant pianist and old college friend Peter Oxley, who is in the process of interviewing different musicians for his website.  Here is a link to a transcript of our conversation:  https://peteroxleypiano.wixsite.com/conversations/alex-corlett

Many guitar students find that they begin to progress much faster when they start to focus on interval shapes. After all, intervals are the building blocks of all melodies and chords. Here is a reference chart showing the different possible shapes for intervals no larger than an octave.

An interval played on a single string can be transferred to any other string, but remember that interval shapes using more than one string are altered by the change of tuning between the guitar’s third and second string. The shapes given all keep to within a span of five frets, and none skip more than one string, meaning they can be practiced with pick or fingers. If the intervals are practiced in conjunction with learning the position of notes along the length of the fingerboard, vast strides can be made in fretboard knowledge and sight reading.

Looking forward to this one.  7:30pm this coming Sunday (14th May).  A chance to air out some of my originals as well as some classics which don’t always get performed.  Myself and Ayo Akintonwa on guitars, Ben Treacher on alto, Martin Young – bass, John Park – drums.  Joining us for several numbers in each set will be the young and talented singer Samantha Grefsheim. 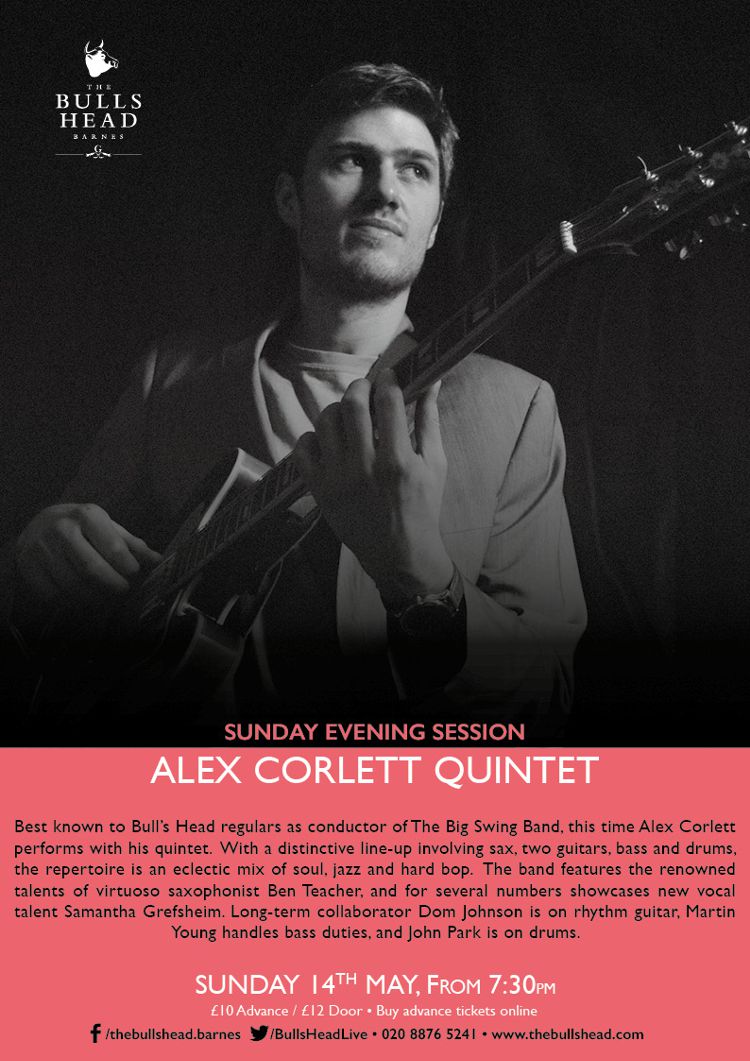 The other day I decided to take half a dozen of my short original tunes and see what could be done by overdubbing some additional parts.  All sounds were made using one guitar, and everything was recorded onto a Tascam multitrack via a Roland amp.

The first track, Workin’ All Night (the title is a slight exaggeration!) is an attempt to bring some funk to a drumless setting.  I recorded a rhythm guitar part to the left channel, a bassline to the right and the main lead line somewhere in between.  To simulate a bass drum kick on beats two and four I turned up the bass frequencies and patted the three lowest guitar strings.  Pick scraping on the sixth string helped to allude to a kind of vinyl scratching effect, and a separate track with phaser helped to simulate an organ sound for the chorus.

Microcosm is more of a laid-back, open-ended jazz groove with the melody dead centre, rhythm guitar panned to the left, palm-muted bassline to the right and the phaser for sustained chords.

Skimming Stones tries to evoke that pastime with the bounce of the rhythm and the use of different phrase lengths.  This time there are two rhythm guitar tracks panned far left and right.  The first played fingerstyle, and taking care of the bass notes, the second played with the pick.  The lead line occupies the space between the two.

Blues Amble is taken at an appropriately leisurely pace.  A bassline is played on the low strings of the guitar.  There are once again two rhythm guitar parts to support the melodic line, the second of these parts provides tremolo chords during the solo.

Anthem For K.B. makes use of a few extra tracks.  In addition to the rhythm and lead guitar parts, there is also a phased bassline, designed to reference more of a fretless sound.  The phaser is employed for chords in another channel, and other tracks are used for percussive effects such as muted strumming and fretboard bongo tapping!  The K.B. in question is Kenny Burrell – the first jazz guitarist I ever heard – on a CD borrowed from the library back when they had a pretty good collection.

Lazy Evening is the last of the six tunes.  It’s my homage to soul music and in particular guitar players such as Steve Cropper, Cornell Dupree and Teenie Hodges – players whose subtle contributions added so much to the appeal of 60’s & 70’s soul music.  I played the whole piece as a solo track (left channel), then added some touches on top.  These include the right channel rhythm guitar, the basslines, a touch of approximately simulated organ, and a short guitar solo.  Later on, for the minor-key change, two more lines were added, and then panned left and right.  These are single note reinforcements of the 6ths which were present already in the original guitar part. 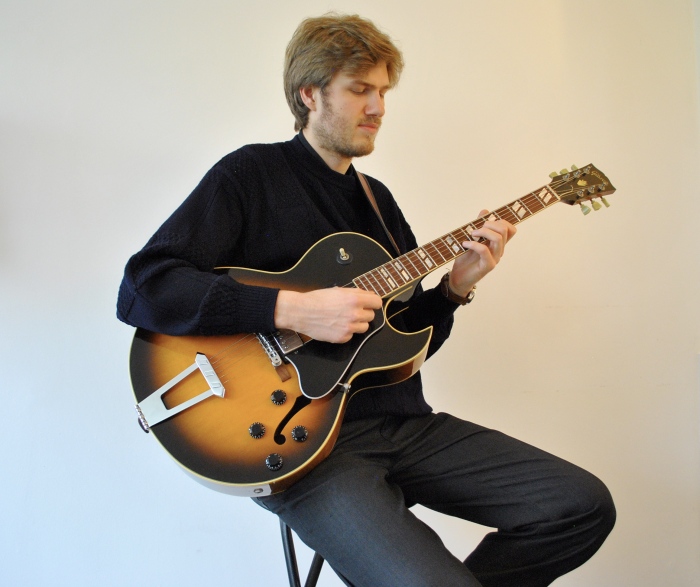 If you’re not careful your guitars will start multiplying when you’re not looking.  The one at the back right is the first one I bought about fourteen years ago.  The frets are pretty much worn out.

I once found out that my predecessor at a school where I was teaching guitar, had been encouraging all the children to use tablature. Not only did the tutor miss a chance to introduce traditional music notation at an early age, they tacitly discouraged the children from getting to grips with its fundamentals. The result was such that when I began teaching them, the children had already developed a preference for tablature and a distrust of musical notation. This situation prompted a few thoughts on the demerits of a form of guitar notation which is now almost ubiquitous.

The first problem with tablature, or tab, as it must be referred to in this age of abbreviation, is the simple fact that it is completely redundant. Tab is the revival and appropriation of a primitive form of 16th century lute notation which was made obsolete centuries ago when musical notation increased in sophistication. If we compare a passage of music displayed in classical notation with the same passage shown in tab, it’s pretty clear that the tab version adds nothing to our understanding of the music. It doesn’t tell you what the notes are, it contains no rhythmic indication, and if you were to present it to any instrumentalist other than a guitarist, they’d find it about as useful as a comb is to John Scofield.

There are certain apologists for tab who would make claims for it being a handy tool for quickly figuring out where to put the fingers. Any suggestion that it therefore provides information which cannot be represented in standard notation is of course nonsense. Classical guitar notation can explain which strings to play, and at which frets to press, in what position on the fingerboard, and with which fingers. All of that information can be displayed on a single stave, and even more importantly, the player can elect to discard those editorial suggestions and choose their own alternatives. Players of other instruments, and indeed their teachers, don’t have the problem of a dumbed-down, illiterate, sub-standard notation, posing seductively as an easy alternative to the traditional variety. They know, or at least they should, that in order to improve they had better start at the beginning and gradually learn what the notes are, where to play them, and how to read and write them. Tablature encourages would-be guitarists in their delusional and unacknowledged belief that competence can be reached as effortlessly and mindlessly as possible. Trying to master the guitar using tablature is like trying to pilot a plane using only youtube tutorials and wikipedia articles.

Because of the shortcomings of tablature, it is usually published beneath and as an adjunct to the traditional stave. This leads to two problems. Firstly, the space that is taken up by two staves means that a piece of music which would have fit comfortably onto two or three sides of paper, now sprawls tediously and unhelpfully across page after page, creating the nuisance and hindrance of multiple page turns (This also hampers understanding of the form of the music). Secondly, because of the presence of the tablature, editors see little need to attend to the presentational quality of the musical notation, nor to add any suggestions of the sort found in classical scores. Because publishers see the inclusion of tablature in their books as a way of increasing the potential number of buyers, fewer new guitar books are published without it. This creates an absurd situation whereby a large number of books which are unsuitable for guitarists unable to read music, are published with tablature so that they will buy them anyway. Its presence then has to be tolerated and ignored by those who have taken the trouble to learn how to read music, and would much prefer the book to contain no tablature at all. The end product is therefore of very little use to anyone. Any guitarist who wants to get beyond a certain point has to make the conscious decision to spurn tablature. Not just to relegate it, but to completely cut it out. Better to do so sooner rather than later.

Shots from a couple of duo gigs with Evie O’Driscoll on bass and Dom Johnson on guitar respectively.  I don’t know who the man in the top hat in the painting is! 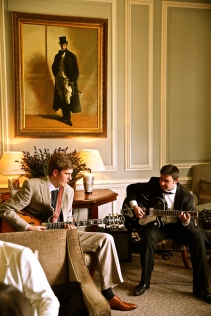