Jim Hall (1930-2013) was a favourite guitarist amongst those who preferred musicality to bravura.  A refined and subtle performer, with a distinctively nuanced tone, Hall valued sensitivity, logic and craftsmanship and shunned gratuitous displays of technique.  Before embarking on his unusual and distinguished career, he gained a degree from the Cleveland Institute of Music, where he majored in music theory.  His musical influences were diverse and included Béla Bartók, Duke Ellington, and Charlie Christian.

Describing his approach to tone production in his 1990 book Exploring Jazz Guitar, Hall stated ‘I use my amplifier to play softer, odd as that sounds.  With a good amp… I can get a much softer tone quality than I can acoustically – much less attack, fewer picking noises, more of a legato, saxophone sound.’  The book is a revealing insight into Hall’s outlook.  It is safe to say that many aspects of his creative approach to playing have had an indelible influence on modern jazz guitarists.

One of the many reasons to study Hall is simply the fact that he played in a wider variety of contexts than almost any of his peers.  The prestige of the players who used Hall as a sideman is testament to the high regard in which he was held.  He made duo records with Bill Evans and with Ron Carter and was often used as an alternative to a pianist in a quartet setting.  Good examples of Hall fulfilling that role can be found on albums by Sonny Rollins, Art Farmer, and Paul Desmond respectively.  Hall was also involved with Gunther Schuller on the 1961 ‘Third Stream’ album Jazz Abstractions.  Other important associations were formed with Jimmy Giuffre and with Chico Hamilton, and he was featured on various albums, including ones by Ornette Coleman, Gerry Mulligan, John Lewis, Jimmy Raney, and Ben Webster.

(If any of the information on this page is of use and you would like to make a donation, please use the button below).

The following excerpt outlines the beginning of Hall’s solo on the tune Here’s That Rainy Day from the 1965 Paul Desmond record entitled Easy Living.  It clearly demonstrates Hall’s approach to motivic development, honing in on the three note motif in bar 1, and using it as a means of adding constancy to his musical ruminations.  Notice the way in which Hall begins his solo with such clarity and simplicity, tracing out a descending melodic sequence, and then gradually increasing the degree of complexity.  Bar thirteen is interesting for the way in which Hall incorporates chromaticism so artfully, placing it on either side of a major seventh arpeggio.  The absence of chordal accompaniment affords Hall the freedom to play a Bb in bar 18 over the tonic chord. 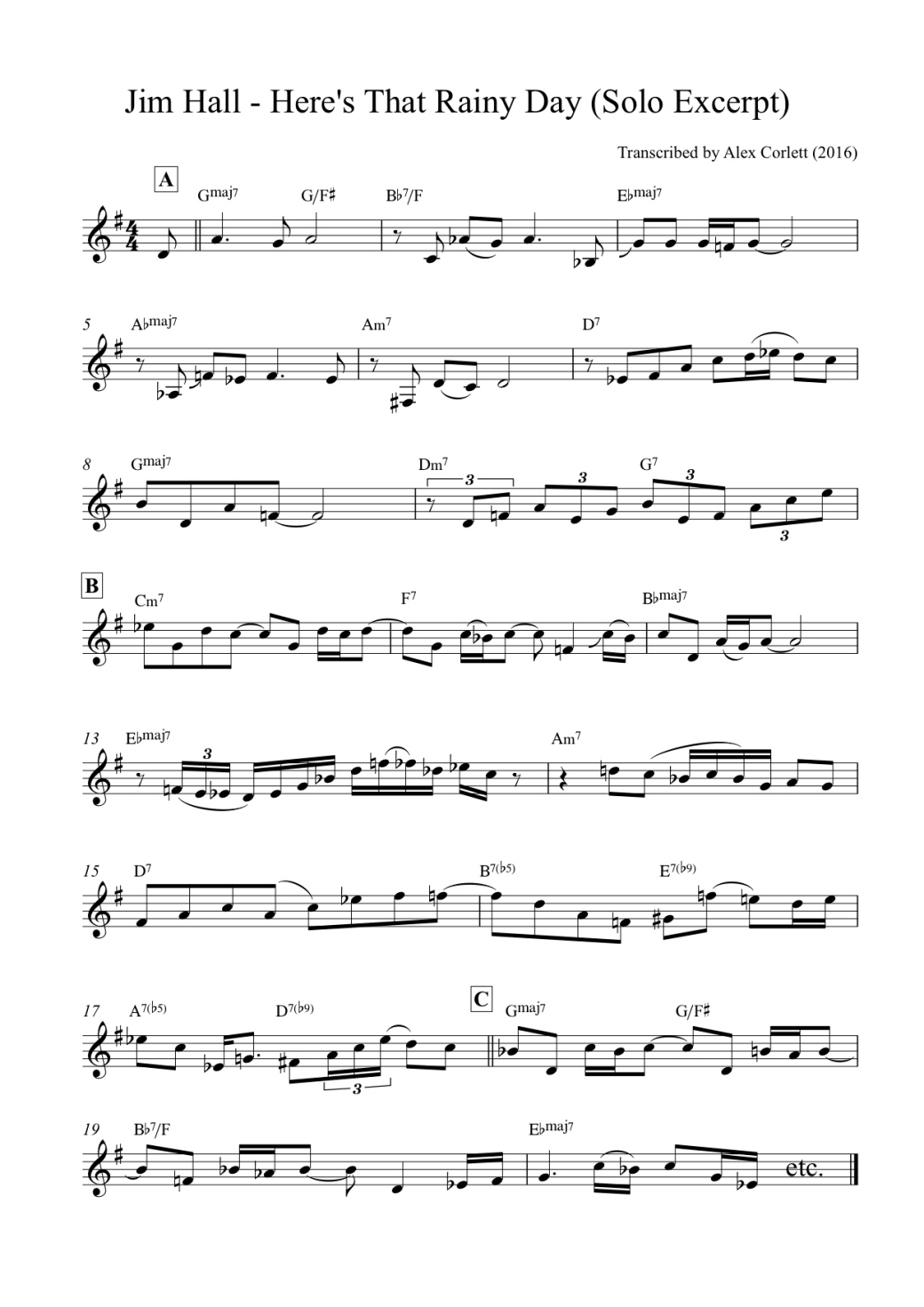